I once told someone—and still stand by this statement—that part of living in New York is crying in public places. Once I decided to walk from Union Square to my job at Longchamp in Soho. Not far, but I ended up getting lost in Bowery—in a full on snowstorm. I was freezing and soaked and my phone was dying and I went into a Whole Foods, walking through the produce with tears half-rolling, half-sticking to my face.

There have been rough mornings with Ryan when something dumb was said that left me frustrated and upset, and I had no choice but to sit in meetings, staring straight at the table while silent *hopefully unnoticed* tears have crept down my cheeks.

But one of the most memorable cries was when I full-on wept in Madison Square Park. Even when I think about it now, my heart hurts a little for my 25-year-old self who had heartbroken tears streaming down her face in February amidst teams setting up tents for Fashion Week parties and FIT students struggling past, carrying sketches and garment bags.

Did I ever tell you about the time I was in casting for a reality show? It was a few years back for Season 2 of House of DVF on E!. I filled out the unbearably long and introspective application and was shocked—thrilled!—to get a call from a casting producer. Ryan filmed me going through my closet, dancing like a lunatic, and wearing my sole piece of DVF: a green printed dress I won for selling the most of the brand’s dresses during my Nordstrom days. A producer called me every couple of days, encouraging me to prep for my on-camera test, which he said was a meeting and also sometimes said was a job interview. The producer kept telling me to bring my husband to my interview. “It’ll really set you apart,” he’d nudge. I declined; TV show or not, I didn’t want to be pegged as the girl who couldn’t do anything without her guy by her side. To meet them in the middle, I printed out pictures of the two of us, and packaged those on top of my portfolio for my Test/Interview/Whatever.

The big day finally rolled around, and I found myself in the DVF showroom, waiting to meet Stephanie Greenfield, the brand’s creative director and resident terrifying lady boss. At one point, a camera guy pushed a door back and as it swung open, I saw a brunette sitting on a tufted love seat, looking petrified. It turned out to be a mirrored door and that brunette was me. “PULL YOURSELF TOGETHER, this is your shot” I remember think-screaming to myself. 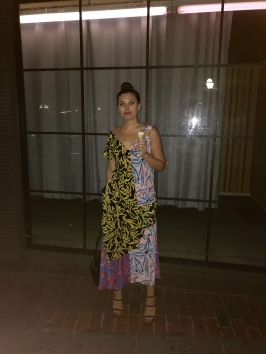 After shaking Stephanie’s hand about 17 times for the camera, we sat and she opened my portfolio, and I watched as a look of what I can only describe as “High Brow Disgust” washed over her as she stared down at an image of Ryan and Haley Hoover. “What’s this?” she clipped, with one eye-brow raised. I crumbled into a puddle. And will spare you from all of the ways she proceeded to poke holes in my dumb resume and tear me down and how I failed to stand up for myself. DVF had just written “The Woman I Wanted To Be” and I often think if I had repeated a few soundbites from the book, I wouldn’t have gotten a call later that night that casting needed 12 girls for the show, and unfortunately, I was lucky number 13.

But I knew I was out after my 15 minutes were up in that showroom. I called Ryan and told him it was bad. She hated me. I missed my shot. We had moved to the city in hopes of sky-rocketing to fashion success, and this was the break I had been waiting for. And I blew it. So to the park I went, at 10am, and cried. I cried most of the day, only breaking to host an event for Models For Christ to kick off Fashion Week, and then went home to resume my misery. I would liken the feeling to having the most beautiful diamond ring, and accidentally losing it down the drain in the bathtub.

I learned 2 things that day:

I could pursue the former, but needed to really invest in the latter. Self-discovery is no easy or instant task. It was a tough year. I struggled through knowing myself and understanding who I am—and still do. Being “fearfully and wonderfully made” has long been a very tough concept for me to grasp, although I do believe that the God I serve is so good and wants only the best for me.

When I recount my story, the part with the reality show serves as a pivotal moment for me. Growth hurts, the stretching and the bending can be painful. Somehow that burden of that rejection gave way to a sting and then to an ache, an ache to a winch, and a winch to a memory that simply makes me shake my head. I constantly second guess myself and my worth, but bit by bit I know a little more about the woman I am, and the one I want to be. Optimistic, enlightened, and persistent.

One thought on “The Part With The Reality Show”