The 2016 SAG awards have come and gone leaving nothing but some great memories, a few forgotten sequins, and, of course, updates to the HiHaleyannie Fashion Bracket! For such a subdued award ceremony—seriously, compared to the Golden Globes, the SAG awards are like a child’s birthday party, so thankful and G-rated—the stars really brought laid it out on the red carpet.  There were a few twists this round, but in all honesty, I was quite pleased with the results. Take a look at the standings: 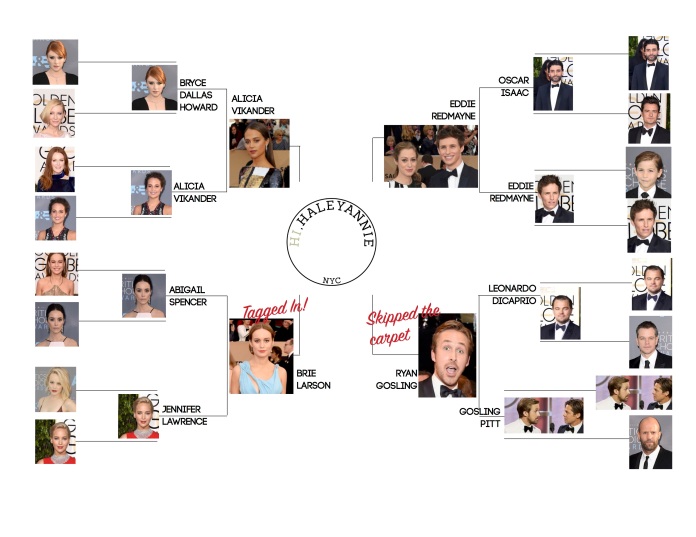 Our final two for the ladies are:

I’m not going to lie. I didn’t want her to win and I didn’t want her to be a frontrunner. I wanted her out the first round. Personally, I’m not a huge fan of her “films”, but Alicia’s red carpet run with Louis Vuitton has been too good to ignore. She did kick off the season at the Critics Choice Awards in Mary Katrantzou’s striking beaded gown, and now, this LV shift throws us for a loop. At first glance, it’s an unassuming number, but turn to the side and BOOM, that sky-high slit gives the perfect amount of leg. *Insert Leg Up On The Competition Joke Here*

As previously mentioned, sometimes the red carpet is inconsistent. Where was JLaw at the SAGs? I had her slated to win, but then she has the nerve to NOT SHOW UP to the SAGs?? Did she not consider my bracket?! The great news is that Brie Larson very much DID show up, and very much DID slay in this grecian Atelier Versace gown that loops, dips, and drapes in all the right places. Shout out to JLaw for tagging BLar back into the bracket. I may just grant you a pass card back into the bracket if you show at the Oscars. We’ll talk later.

And our final two for the men:

Eddie wore his Dior tux like it was his first, last, and only tux. He stunned. But really, his expectant wife, Hannah, was super clutch. It’s been said many times that behind every great man is an even greater woman. But in Eddie’s case, she’s right next to him, and she’s wearing high-impact, floor-length sequins.

I hate to say that Ryan Gosling has this in the bag, but like, he’s got this in the bag. The Gos is so confident in his looks that he doesn’t feel the need to rock the red carpet these days. Cheer up, shy guy, we’re all still staring at you in that Gucci midnight blue suit anyway.

Clearly, this isn’t over yet. Literally, it’s not because The Academy Awards are not until February 28th. Happy Valentine’s Day y’all, I’ll wrap this up in March!